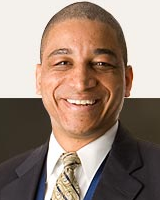 Raymond actually started college, miles away from home, at only 16 years old. Raymond Reid began his legal career first as an assistant state attorney and then as an assistant general counsel representing the City of Jacksonville, its independent agencies and constitutional officers. After that, Raymond joined The Law Firm of Pajcic & Pajcic in 2002. Raymond is well-traveled and speaks French and Creole. He is our resident technology and computer guru.

As early as 2009, Raymond was named as a Super Lawyer Rising Star. He is one of few Jacksonville attorneys to earn U.S. News & World Report’s annual “Best Lawyer” designation for 2015 in plaintiff’s personal injury practice. He earned that distinction again in 2016. Raymond has also been inducted into the American Board of Trial Advocates (ABOTA). Raymond has been lead counsel in more than 120 cases at the firm and has been involved in two of its highest jury verdicts. His experience includes lengthy product liability and medical malpractice trials, some lasting four to six weeks at a time. Raymond’s success includes seven and eight-figure verdicts and settlements. Raymond shares his knowledge by lecturing locally, statewide and nationally for meetings of groups such as AIEG, ATLA, the FJA and JJA to name a few.

Raymond speaks three languages and is extremely knowledgeable regarding computers and technology, frequently lecturing nationwide. He is an accomplished pianist who composes his own music. Raymond also holds a first-degree black belt and has competed in countless tournaments. He conducted a self-defense seminar at the statewide Florida Judicial Assistants Association.

Raymond has served on the Ethics Commission for the City of Jacksonville; co-chaired the JCCI study analyzing Jacksonville’s homicide epidemic; and served on the Mayor’s Pension Transition Team. Raymond is a co-founder and the current president of the Haitian-American Professional Association of Northeast Florida, a nonprofit organization. Raymond is a member of the Fraternal Order of Police Foundation. Raymond holds a first-degree black belt and is a member of the Cuong Nhu Oriental Martial Arts Association, also a nonprofit organization. Raymond has also coached winning mock trial teams at Florida Coastal School of Law and is often asked to speak as a guest lecturer.

The Law Firm of Pajcic and Pajcic specializes in serious personal injury and wrongful death cases. We are there to help individuals and families who are now facing catastrophic and traumatic changes in their lives because of the fault of others. With more than 310 years of combined legal experience, our firm’s attorneys zealously represent our clients in their time of need.

To our attorneys and legal assistants, each case is a deeply personal story. We seek to provide individual attention and the compassion that every client deserves.

Pajcic and Pajcic was founded in 1974 by brothers Steve and Gary, who wanted to practice law together and provide high-quality legal representation to those in our community and throughout Florida. From the beginning, outstanding service was a signature of our firm and it remains so today. Our ultimate goal is to obtain a fair recovery for every client.

Over the years, The Law Firm of Pajcic & Pajcic has handled over 9,000 personal injury and wrongful death cases. We have recovered over $900 million for our clients over the decades, and every one of those dollars made a real difference in the life of a victim of someone else’s negligence. From our office in Jacksonville, we represent accident victims from North Florida along I-95, I-75, I-10, I-4 and across South Georgia. Our attorneys have also handled high-profile cases across the United States.

Founding partner Steve Pajcic and other attorneys in the firm are Florida board-certified civil trial attorneys. Our personal injury attorneys have the highest rankings afforded by peer rating groups, including AV Ratings and Top Ranked Law Firm by Martindale-Hubbell, Best Law Firms by US News and Florida Super Lawyers.

Steve’s brother and law partner Gary Pajcic passed away in 2006, but a second generation of Pajcics and other attorneys who helped build the law firm continue our legacy of signature service and outstanding results. Because of our team approach to all our cases and to every trial, when you hire The Law Firm of Pajcic & Pajcic, you do not just get an injury attorney or two. You get the benefit of the firm’s combined experience of more than 310 years of trial work in the Jacksonville area and beyond.