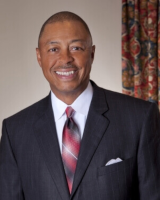 Following his graduation from Mercer and upon admission to the State Bar of Georgia, Virgil became Assistant District Attorney for the Macon Judicial Circuit, assigned to the Trial Division. While at the District Attorney’s Office, Virgil handled and tried many serious, high profile cases. Virgil also served as County Attorney for Bibb County for many years and still represents a number of elected officials in the consolidated government.

Virgil is actively involved in the community and is a member of the following associations:

The American Association for Justice
William Augustus Bootle Inn of Court
Tubman Museum Board of Trustees
100 Black Men of Macon-Middle Georgia, Inc.
New Town Macon.
By the end of 1987, Virgil decided to leave the District Attorney’s Office and entered the private practice of law with Mathis, Sands, Jordan & Adams, having offices in Macon and Milledgeville, Georgia. Since 2014, the law firm has been known as Adams, Jordan & Herrington, P.C. and continues to maintain offices in Macon, Milledgeville, and Albany.

Awards & Affiliations
In 2001, Virgil was recognized by the Macon Bar Association as Lawyer of the Year. In the same year, Martindale-Hubbell awarded Virgil its highest designation, “AV” for his professional and ethical conduct. Virgil has also been named a Super Lawyer for 2017, 2018 and one of the Top 100 Trial Lawyers by the National Trial Lawyers Association.

Adams, Jordan & Herrington, P.C. primarily engages in personal injury litigation and in this area, Virgil has successfully handled cases involving serious injury and/or death on behalf of victims of negligence resulting from medical malpractice, nursing home abuse, defective products, and other catastrophic events. As one of the esteemed Macon personal injury lawyers at the firm, Virgil is prepared to fight for clients to receive the justice and compensation they need.

If you or your loved one have been hurt due to someone else’s negligent actions, you deserve fair compensation for any harm endured. At Adams, Jordan & Herrington, P.C., our legal team can provide you with the same experienced and determined legal representation that has helped recover millions of dollars for our past clients. We take pride in the manner in which we provide each of our clients with personalized legal services that are focused on helping them move forward with their lives.